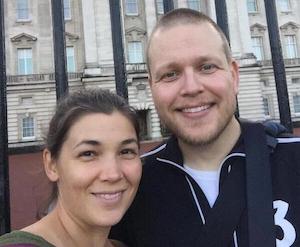 Hi, my name is Christoph.

I was born in Düsseldorf, Germany during the Cold War. I didn’t think I was much affected by it, but I do remember the night the wall fell: 9 November 1989. We were watching it on the TV with my Dad, who paced around the living room with tears of joy. When we visited the East a few years later, it stunned me. I remember it being backwards, gray, neglected.

After four years at the elementary school up the street, I attended a private Catholic school, which wasn’t as bad as it sounds. I studied English, Latin, and Japanese, and enjoyed Mathematics and Physics. After graduating my plan was to study Technical Physics at TU Ilmenau. But God…

On the night of my Dad’s 50th birthday I went home, dialed into the internet, and started chatting with a girl from New Guinea. Her profile said she spoke German, so that’s the language I messaged her in. She was doing German homework with a friend and I was welcome to help out. I did, and we kept talking. Turns out she wasn’t really from New Guinea, but Oklahoma. A few months later, after my High School graduation and convincing her parents that it would be a good idea for me to visit, I did just that.

My flight out of London Gatwick, after a nine hour layover, was delayed, having me worried the whole way whether I was going to make my connection. I didn’t, but was able to take the last flight out. At my destination, as I went downstairs from the gate to claim my bag, she went up to the gate with her brother and friend, barely missing me. With no one to welcome me and being awake for 27 hours, I decided to just take a nap on my bag. What else could I do in a strange place all alone? Eventually they found me and we drove the remaining two hours to her house.

Her family attended a small Baptist Church, which I would be attending every time I came to visit over the next couple of years. Every time I did attend, I was also either bored or frustrated, but I cared enough about this girl to keep going to church with her.

In the spring of 2003 I visited during one of my semester breaks. As usual, we went to church and I didn’t care much for it. Baptist churches offer an altar call at the end of the service, and so here. Except this time, I know God was calling me. “I want you to go forward.” Not audibly, but clear as daylight. But I didn’t go, that’s weird. The following week, the same thing happened: “I want you to go forward.” This time I also didn’t go (still weird), but I talked to the pastor after the service and we set up a time to talk that week.

I don’t remember much of what we talked about, but it must have been convincing, because one night before bed that week I prayed something like: “Jesus, I am not quite sure how this works but I want you in my life.” That night I dreamed of a bright light coming down on me (which may have been just a dream), and my desires changed. As a spiritual baby I started reading my Bible (a brand new birthday present) and slowly growing in maturity. I doubt I had even a passable understanding of repentance or anything, but God chose to save me anyway based on my feeble profession of faith.

We got married in the fall of 2003 after about two years of dating and frequent trips back and forth, and lots of chats and phone calls. We quickly scrapped the original plan of each of us finishing college in our countries after spending a whole summer together and tried to find a way to get me to the US. Our backup plan was to get married, but as idea after idea failed to come together, marriage started to look very appealing to both of us no matter what. So, very unromantically, we decided to get married.

The most surprising thing was her parents consenting to let us marry even though I wasn’t a Christian at the time. “We always knew.” — In the end they were right, and I am glad it worked out this way. They did ask that, once I professed faith, I get baptised before the wedding, which I gladly did the first Sunday I moved to Oklahoma.

Our wedding was small. Only my Mom and Dad came on my side, though the church was packed with my wife’s family. Being slightly less poor after receiving all the wedding gifts, we spontaneously took off to Colorado for our honeymoon.

A couple of rent houses and a Greencard later, we moved to Norman, Oklahoma to attend college. I started out studying Management Information Systems in the Business College and soon moved to Engineering while paying the bills with various tech support and programming jobs. My wife studied Veterinary Technology and provided for us that way. It was a sweet time of spiritual growth and material poverty.

In 2011, with two kids and a M.S. in Electrical and Computer Engineering, we moved to Albuquerque to start post-college life. While interviewing here I was looking for churches and getting somewhat discouraged, so I reached out to friends and found Desert Springs Church. The beliefs matched our recent convictions about reformed theology and several follow-up questions to the elders were answered satisfactorily. So when we arrived in town to start a new chapter in our lives, we immediately had a church home. And two more kids later, here we still are today.